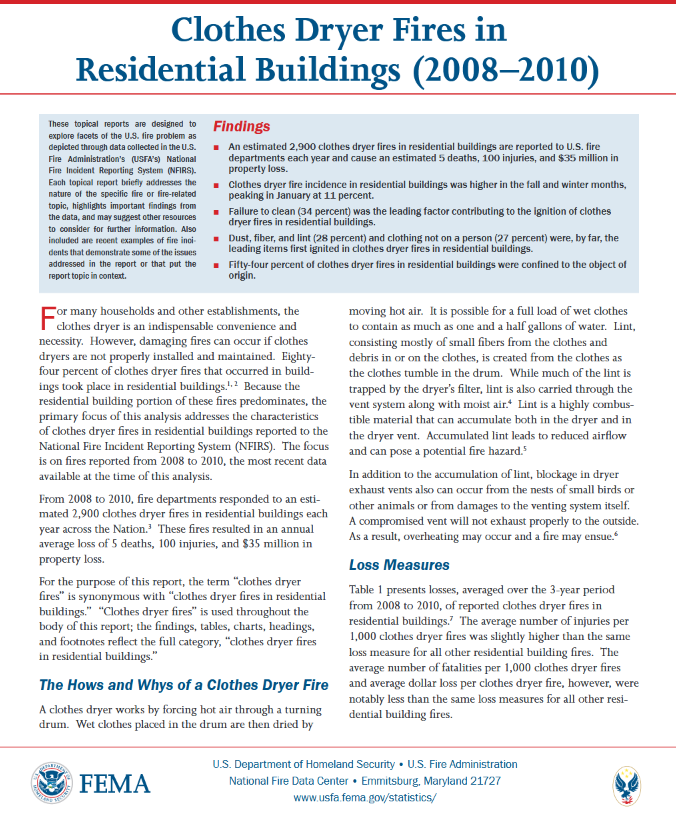 "As you know, NFPA's estimates of dryer fires (or dryer and washer fires) have been considerably higher than what the USFA reported in their new report at:
https://www.usfa.fema.gov/downloads/pdf/statistics/v13i7.pdf.
As the attached table shows, in 2006-2010, NFPA estimates that U.S. fire departments responded to an estimated average of roughly 14,000 home structure fires involving dryers per year, resulting in an  average of roughly 30 civilian deaths, 400 civilian injuries and $191 million in direct property damage annually.  These estimates exclude fires with confined fire incident types.  Homes include one- or two-family homes (including manufactured housing), and apartments or other multi-family housing, regardless of ownership.  Most of our other analyses combine washers or dryers so as to include the washer dryer combinations.

To understand the reason for the differences, it is important to understand how the USFA's National Fire Incident Reporting System (NFIRS) data, the source of detailed detail about fires for both organizations, is collected and the choices analysts must make to accommodate missing, unknown and inconsistent data.  After an incident, local fire departments complete one or more modules about the incident, including the type of incident, its location, actions taken, if a fire, cause, heat source, factors contributing to ignition, equipment involved in ignition, detection and sprinkler performance, etc.  Several NFIRS  fields can be used to describe fire causes.  The most basic asks if a fire was intentional, unintentional, due a failure of equipment or heat source, or an act of nature.  Any of the fields will have some portion of incidents in which the information is unknown (undetermined) or not reported.  Much of the differences are due to differences in handling these incidents.  NFIRS does not require detailed causal information about certain types of structure fires, including confined cooking, chimney or flue, fuel burner or boiler, incinerator, compactor or trash fires (incident types 113-118), although the information is sometimes provided.

Equipment involved in ignition is not a mandatory field in Version 5.0 of NFIRS.  The field was left completely blank in 40% of non-confined home structure fires and coded as undetermined in 1%.

NFPA essentially takes the percentage of non-confined fires with known equipment involved, including those fires codes as “none” that have confirming heat sources, and applies these to the total non-confined fires to develop estimates.  In other words, our estimates include a proportional share of dryer fires include a proportional share of fires in which the equipment involved in ignition was unknown or not reported.

It is also possible to use a hierarchical sort to assign a fire to only one cause, or to decide that one fire may be counted under several different causes.  For example, if the factor contributing to ignition was playing with heat source, and the equipment involved in ignition was a range or cooktop, the fire could be included in the total of fires caused by cooking equipment and by fires caused by playing.  Or, using USFA's hierarchical sort, it could be assigned solely to playing.  If a hierarchical sort is used, a fire that can be assigned to another cause, including something as broad as “unintentional,”  based on a different field will not be treated as having an unknown cause even if equipment involved in ignition was left blank.

NFPA generally handles unknown data one field at a time, meaning we have a much larger share of fires with unknown data when looking at equipment involved.  Other differences in query criteria play a much smaller role in the differences between USFA's and NFPA's estimates.  For example, NFPA includes all types of structure fires in its analysis while USFA excludes structures other than buildings or portable buildings.

USFA's report provides information about the circumstances of these fires.  When trying to determine trends, it is important to be sure that the analysis methods are generally consistent."